It is now official – we reached the 30 degrees mark, friends discuss lake trips, and swimsuits are being worn in trams : the Berlin Beach season just started. And with it comes the yearly Karneval der Kulturen, or Carnival of Cultures. It was described to me as a traditional carnival celebrating the diversity of communities and cultures in Berlin. Its website explains that it was created in the mid-1990s against the rise of the right-wing to promote the acceptance of a multi-cultural German society. An honorable goal, I say.

My apartment being in the heart of festivities, I naturally wanted to throw a glance and maybe move to something else than electro. Geography and personal inclination drew me to the “African music” stage. I was not moved. And so I moved. The heath was unbearable, and the crowd sweaty, red and impenetrable. Loads of foodstands, but nowhere did the music or the atmosphere catch my sensitivity. I wondered why and went back to the “African music” stage, had a jerk chicken and headed home, feeling dirty and confused. Why was I so uncomfortable?
A few days later, I stumbled upon a conference about the decolonisation of thinking. According to the speakers, a lot of our theoretical thinking is tainted with colonial ideology and the idea that Western  countries and culture are superior. This ideology is visible in economic vocabulary: we have countries that are developed, emerging and under-developed, pertaining to the first, second and third world.  It is less visible but all the more present in our everyday use of concepts. We do not qualify anything Western, and “Sciences” mean “Western Sciences”. Yet we say “African literature”, “South-American feminism” or “Asian modern art”. As if anything Western was The Essence, the natural and exclusive ideal standard to which all others should aim.

On my way home, I thought about the carnival again. Suddenly, I understood why I was bothered. This carnival presented other cultures as being exclusively folkloric, entertaining and decorative. This is what was meant by “Carnival of Cultures”. And none of the German folklore was included. It was  an over-simplifying packaging of these communities to better sell them. The music was a bland mishmash of exotic sounds to suit the taste of Brandenburg citizens coming to town to see what browner people look like when they celebrate. A “Multi-Kulti” celebration, as they say here in Germany for anything which is not exclusively German. “Multi-Kulti”. Sounds like Tutti Frutti. No need to define what it is. No one cares about the essence and richness of your culture. Multi-Kulti will do.

And so the carnival subconsciously reminded me of these 19th century human zoos. Except we, browner people, were there willingly. And so I left. 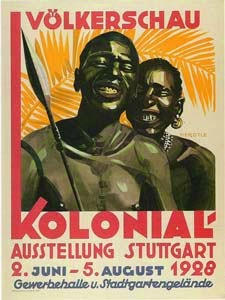 On the day of the parade, I dragged myself back, giving another chance to this cultural feast. As I watched carriages from Brazilian, Dominican, Paraguayan, Laotian, Nepali and Sri Lankan cultural associations with joy, followed by the many samba and salsa school carriages, I wondered where the Syrian, Lebanese, Iraqi and Turkish carriages were. In a city essentially fed with falafels sandwiches and kebabs, it was a fair question. I checked the program. No such carriages.

Was it to do with the communities’ lack of commitment or their unwillingness to expose themselves in a monkey game? True, unlike in South-America and Asia, carnivals are inexistent in Middle-Eastern cultures. They have musical wedding processions, though. That would have done the job. I wondered whether the under-representation of these communities and the consequential disparity between the carnival and the reality of immigrant communities in Berlin, had to do with the “Multi-Kulti” packaging. Maybe these people did not fit, beyond falafel sandwiches.

I don’t believe multi-cultural societies need packaging. There will always be fringes of society which are not ready, individuals who cling to a long-lost identity they could not define themselves, to that something in the past when all was better. These people won’t be convinced through human zoos. If anything, the artificial character of those events will only comfort them in their idea that other peoples’ cultures are inferior.

My carnival thoughts brought me back to a Balkan-Gypsy event I once attended with an ex-Yugoslavian friend. As we watched a bad Balkan gypsy brass band from somewhere in Germany pretending to be from somewhere east of Vienna, he exploded: “I am sick of it. Any idiot who can play the trumpet and grow a mustache starts making dissonances very fast, behaves like a misogynist mafioso, drinks Vodka and calls himself a gypsy-Balkan musician. We don’t even drink vodka. It’s sljivo or rakia.” I laughed and nodded. I had witnessed the same phenomenon when salsa was the hot kid on the dance floor. After three dance classes of some sort, anyone could buy a white hat and a sleeveless top, order a Mojito and improvise himself Cuban or Colombian. Latinos were annoyed, but not too much. They could still dance better than most.

I am all for open-mindedness and cultural exchange. Yet the only exchange I got from that carnival was that of my good bike against a shit one. We have strange bike thieves here in Berlin. They don’t just knick your stuff. They give you rubbish too.

Sometimes cultural exchange happens. I saw it in the May Day festivities. Sometimes it is just post-imperial exploitation and over-simplification of other peoples’ cultural heritage.

Keep calm and decolinise your thoughts.